I honestly did not know what I was going to write about when I sat down to my computer to compose this post. I am tired of the upcoming election and can’t bring myself to write about the struggling Proposition 37. Not a lot has been happening in the garden, not enough to inspire a post. What has stuck with me is the perfect fall afternoon we had and the time I spent with my children in the backyard this afternoon.

It started out with me determined to get something done in the garden. I am feeling really behind, and having a sick family these last two weeks has made it almost impossible to do any significant work out there. So, I did manage to turn the soil and plant shell peas in one bed. My daughter helped out, which she hasn’t done in a while. I have a sneaking suspicion that she realized if she helped I would finish faster and we could get down to the real business of playing with her plastic animals.

These little plastic animals are by far her favorite thing to play with. I often find little “worlds” she has created for them, markers of her imagination left behind. It started a few months ago when I discovered this one after she had gone to bed one evening.

A month or so later, this one:

And then this one:

Lately, she has been collecting food for her animals everywhere we go: grass from in front of a museum, seed pods found on the playground, weeds plucked from the ground…. And, these little animals have been coming outside a lot more, as she finds and creates worlds for them in our backyard, alongside the garden.

My daughter turns 5 at the end of this month. She barely fits in my lap anymore, her long legs always flailing about somewhere. I have been keenly aware of this birthday for a month or so now, a huge milestone, a marker that next year she will start school full time. As I walked her through the parking lot to her preschool classroom this morning, I deliberately paid attention to how her hand felt in mine, its size, its weight, its warmth. And when she asked me to “play” this afternoon, I decided not to worry about all that needed to get done and said, “Yes.”

We started in the tall grass that had not been cut all summer because the zucchini plant had grown over it. She drug her dad out there this morning to tell him, “Never cut this part of the grass again. It is a home for my animals.” A few minutes after the bear and cheetah had made their acquaintance, I spotted a praying mantis. 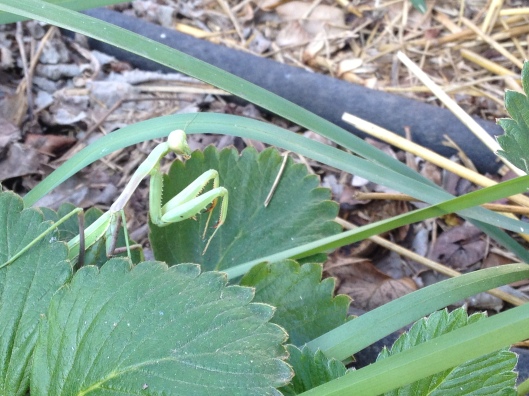 It was all good until it turned its head to watch. We were both a little creeped out and moved to the “next best place” in the yard for the animals. The last remaining bush (that is destined to be yanked out for a little berry patch) makes great climbing for these little plastic creatures, so there we went. We built “nests” for them at the bush’s base as they dared each other to climb to even higher branches. Meanwhile, Edie’s little brother walked around intermittently trying to make off with one of the little animals and banging things with a stick.

Eventually, it was time to retreat inside so I could get dinner going, but I think we all came in feeling very satisfied. It all sounds so cliché when I say it to myself, daughter growing up, fleeting moments, slowing down for a minute to enjoy, but it is also very real. Tomorrow I will probably wake up with that mental to do list that will include many gardening tasks, but maybe, just maybe, I will take my daughter out to breakfast instead of getting to work.

6 thoughts on “Stopping to Play”